Why Underpinning May Be Necessary with Construction Projects

A structure is only as strong as its foundation, and sometimes underpinning may be needed.

Underpinning is one process of deep foundation, which occurs when a type of foundation is placed at a greater depth below the ground surface and transfers structure loads to the earth at depth.

With underpinning, a new foundation is installed under an existing one as a means of providing additional support to the structure.

When a Structure Needs Underpinning

“Regardless of why underpinning may be needed, the process is critical to maintaining the integrity of any structure. A building cannot exist without a strong foundation,” said Dan Connolly, owner of Connolly Engineering.

Underpinning may be necessary for a variety of reasons including:

In dense metropolitan areas like New York City, underpinning is used during the construction of adjoining or adjacent structures that call for the removal or excavation of the soil surrounding nearby properties.

How The Underpinning Process Works

The structural configuration of the building to be underpinned plays an essential role in the design of the underpinning.

The majority of the issues that arise with underpinning occur during the underpinning of load-bearing unreinforced masonry buildings. Quite often, these older buildings have never been explicitly designed to sustain horizontal loads. If horizontal loads are applied perpendicular to the face of a masonry wall (out of plane loads), the wall’s response is weak. Pin underpinning has the potential to introduce such out-of-plane loads.

It is now a code requirement in New York City to understand the potential response of the underpinned building to a lateral load.

Some Key Elements of Underpinning

Underpinning must be done in controlled stages – called “pins” – to avoid the risk of overly disrupting the foundation. Failure to approach the process too abruptly could lead to structural failure. By underpinning through these stages, it can then be determined by studying the soil composition how much weight the structure can bear.

Steps for designing a pin underpinning: 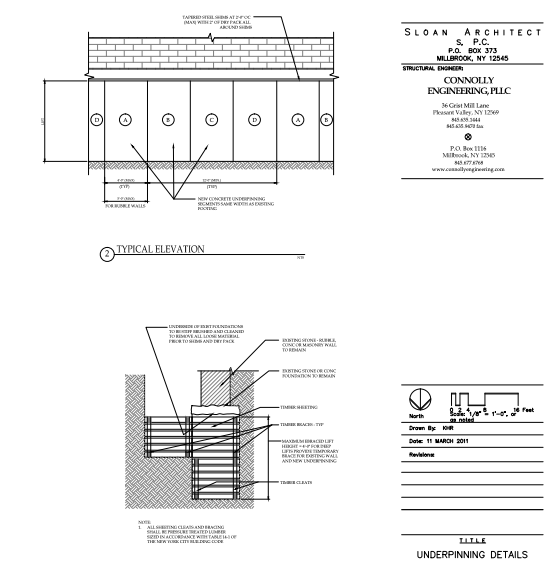 Decades of Experience With Underpinning

Put the health and safety of your commercial building in the hands of experts like Connolly Engineering.

Your project needs an experienced engineer who can:

Our licensed and insured team has the experience and skill to handle all your foundation repair needs. We’re able to utilize the most advanced, industry-leading technology and equipment so that your project will be executed efficiently and flawlessly.

We can design and install an underpinning system relative to the needs of your construction project. Contact us today to discuss your project and how we can help.

You can also click here to learn more about the other structural and civil engineering services offered by Connolly Engineering.